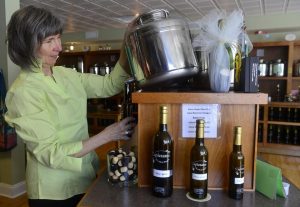 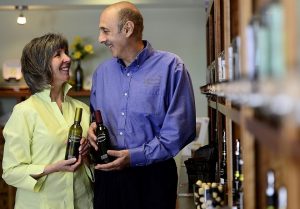 Thank You Ann for an awesome article to help people learn more about our mission and passion.  Suzanne and Stephen Capizzano

When you stop in to visit let us know where  you heard about us.

We are five years old now on Coggswell Street in Pawcatuck CT. Stay tuned for our Anniversary Celebration.

As science developed, we have learned that a significant amount of health attributes related to extra virgin olive oil are not only linked to its profile rich in monounsaturated fatty acids but also to its biophenol content. In the early days, total biophenol content was simply measured by measuring the reaction of this complex group of substances with a colorant (Folin-Ciocalteau). The darker the blue color developed from the reaction, the higher the level of biophenols. The actual level of biophenols was determined by a comparative scale measuring how much color was developed by known quantities of a standard phenol (either caffeic acid or garlic acid). Even when this method provided a reasonable indication, it was far from perfect as all different phenols react to the colorant in different ways. Furthermore, it did not tell us anything about the different groups of biophenols. As we know now, some of those biophenols have very specific health and sensory properties (i.e. Oleocanthal, which has important ant inflammatory action and it is responsible for the pungent feeling on the back of the throat).

Even when there are no limit for polyphenols in international standards, they are very effective antioxidants in olive oil and contribute significantly to oxidative stability, shelf life and health claims. Given the growing importance of these antioxidants, a new and more precise measuring method has been developed. This method utilizes High Performance Liquid Chromatography (HPLC). High Performance Liquid Chromatography (HPLC) is a form of column chromatography that pumps a sample mixture or analyte (in this case EVOO) in a solvent (known as the mobile phase) at high pressure through a column with chromatographic packing material (stationary phase). The sample is carried by a moving carrier gas stream of helium or nitrogen. HPLC has the ability to separate, and identify compounds that are present in any sample that can be dissolved in a liquid in trace concentrations as low as parts per trillion. Sample retention time (the time that it takes for each biophenol to exit the column) will vary depending on the interaction between the stationary phase, the molecules being analyzed, and the solvent, or solvents used. As the sample passes through the column it interacts between the two phases at different rate, primarily due to different polarities in the analytes. Analytes that have the least amount of interaction with the stationary phase or the most amount of interaction with the mobile phase will exit the column faster. A detector at the point of exit determines when and how much of each biophenol is sensed. The total amount of biophenols in this method is determined by adding the individual quantities of each measured biophenol.

There are typically more than 20 different biophenols in extra virgin olive oil. The prevalent classes of hydrophilic phenols found in EVOO are phenolic alcohols and acids (i.e. Hydroxytyrosol and vanillic acid), flavonoids (i.e. luteonin), lignans (i.e. pinoresinol) and secoiridoids. Among these substances the last two classes include the most concentrate phenols of EVOO. Secoiridoids, like aglycone derivatives of oleuropein, demethyloleuropein and ligstroside, are present in olive fruit as most abundant EVOO phenolic antioxidants. Several important biological properties (antioxidant, anti-inflammatory, chemo-preventive and anti-cancer) and the characteristic pungent and bitter tasty properties have been attributed to EVOO phenols.”

Capizzano Olive Oils & Vinegar – the Olive Oils and Balsamic Vinegars of the Rio Olympic Games Supplied by The Bradley’s – Veronica Foods are one and the same at our stores! 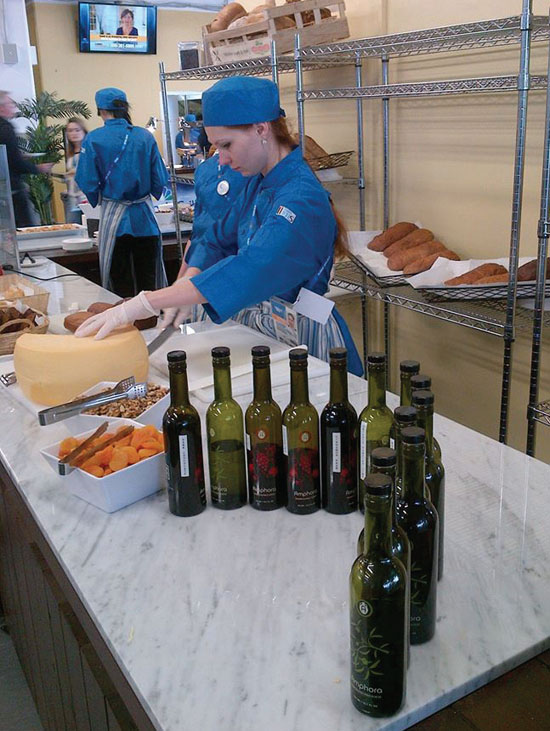 For the second consecutive Olympic Games, we are proud to announce that our our olive oils and vinegar were selected by the official US Caterer to nourish the US Olympic pavilions in Rio serving our athletes and international press. Our products are being incorporated into  thousands of daily meals in several different locations.

“The olive oils and balsamic vinegar that the Bradleys procure and create will be perfectly paired with the fresh and organic ingredients Crisafulli’s team purchases locally to make healthy meals for the athletes”.

Chef Crisafulli selected over 30 oils and vinegars to be featured in various dishes and to be used as dressings. – “What makes these products so special are the many years this family has partnered with olive oil producers all over the world, ensuring they produce according to their criteria to extract the maximum health benefits and taste from the olives. Procuring all over the world allows them to follow the season and to constantly sell very fresh oils.” 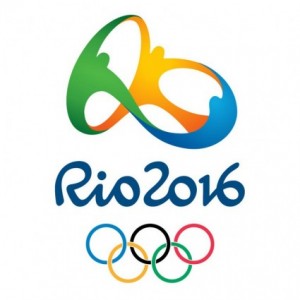 Looking for an fresh seasonal extra virgin olive oil starts with the crush date, knowing how healthy the olives were at the time of crushing, the polyphenol levels (anti-inflammatory benefits) and how they are stored are important to know when choosing wisely.

We educate everyone who wants to learn about what makes extra virgin olive oil – extra virgin and the health benefits.